Live A Tangible Life, Far and Away

I stood in the middle of the living room with my tea towel in hand, stew boiling over on the stove, mesmerized by what I was seeing. I had caught the tail end of the old movie Far and Away and the depiction of the Oklahoma Land Rush had gripped me. It caught my breath tonight, despite the fact that I had seen this movie many times since its debut in 1992.

The absolute absurdity of lining up and running full speed in a mad dash for miles to claim a piece of land for your home, made me wonder what these people were made of.

No doubt, the very next day they were laying out plans for their new land, staking out the four walls for the home, putting up fences for the livestock, measuring off the fields for crops and instantly starting a brand new life.

At twelve o’clock on Monday, April 22d, the resident population of Guthrie was nothing; before sundown it was at least ten thousand. In that time streets had been laid out, town lots staked off, and steps taken toward the formation of a municipal government.

Many settlers immediately started improving their new land… By the second week, schools had opened and were being taught by volunteers paid by pupils’ parents until regular school districts could be established. Within one month, Oklahoma City had five banks and six newspapers.

Are you kidding me?!

This was a mere 100ish years ago. Oklahoma as we know it today pretty much materialized out of thin air by the tenacity of passionate people.

All opinions and commentary aside about the fact that these lands were already inhabited by a now displaced people, unjustly treated, and the fact that this movie has a few not so family friendly scenes in it, it is the emotion of this passion that grips me most. They physically wrestled for the next chapter in their lives. The idea of laying claim to their future and their destiny was not a mental assertions. It was tangible and real. They built an entire state literally from the ground up in a matter of days. It is stunning to think about. 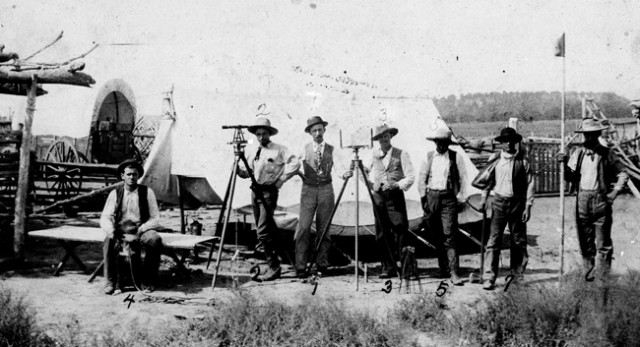 When we talk about having courage and taking hold of our lives nowadays, it often feels like a psychological exercise. We psych ourselves up in the morning and boldly go out… to sit in traffic, or at a desk, finishing our safe routines and duties. And when we falter, when we grow weary, we encourage each other to think ambitious thoughts and find our inner resolve to… continue the routine.

We live our lives inside our heads.

This week I ran across the results of a personality test I took years ago. In the category of Innovation, I was simultaneously very high in Ambition and very low in Daring. I don’t even know how that’s possible! I said to myself with a grin, “Oh, so THAT’S what’s wrong with me.”

I have big dreams and large ambitions, but without the daring boldness to take them out of my head and act on them in the real, physical, tangible world, they will remain just that. This disconnect has been a recurring theme for me of late.

At the beginning of this year, my husband and I discussed some new plans for our lives. Big, daring, tangible and very real plans. I was thrilled… and then immediately panicked.

That Sunday evening I sat in service, lost in my own contemplations. Finally, after my inner wrestling ended in exhaustion, I physically looked up and said aloud, “I need to know You’ve got this. If You’ve got this, then I’ll be good. Bring it on.”

So began a resolve and a journey that is quickly leaving the realm of the theoretical and manifesting in the real world.

Oh, to lift up my eyes, take off on a wild horse
and claim the next phase of my life…
The Deep in me yells, Go!

Do you hear it in you?

To complete this 90’s themed flashback post, I leave you with the nostalgic sounds of Enya.

One day, one night, one moment,
My dreams could be, tomorrow.
One step, one fall, one falter,
East or west, over earth or by ocean.
One way to be my journey,
This way could be my book of days.

No day, no night, no moment,
Can hold me back from trying.
I’ll flag, I’ll fall, I’ll falter,
I’ll find my day may be,
Far and away, Far and away.

One day, one night, one moment,
With a dream to believe in.
One step, one fall, one falter,
And a new earth across a wide ocean.
This way became my journey,
This day ends together,
Far and away.

The Next & Previous Posts

1 thought on “Live A Tangible Life, Far and Away”